Tales as Old as Time

The story of the Prodigal Son is a story of two brothers, equally wounded. The younger brother is stuck in a position of dependency. He was apparently a spoiled youngest and has not learned to fend for himself. Returning to his father, he practices the lines that he hopes will put him back in his family's good graces enough to continue to be cared for. The older brother is stuck in a position of pleasing others. He was apparently a do-gooder oldest and has spent his life pleasing others as a way to get attention. Finding his father, he declares his outrage in finding that once again, his brother is getting attention when he has been the one doing all the work.

While the younger brother is the classic under-functioner, busy finding ways to get others to be responsible for him, the older brother is the classic over-functioner, busy finding ways to do things for others. Who knows how often the older brother functioned for the younger brother, feeding into the same pattern over and over again. Each is totally stuck in his own learned approach to life, an approach missing one thing: responsibility for self.

It's a tale as old as time: older brother against younger brother. And it's astonishing how long the story lasts. Not just in childhood. Not just as adults, as the story of the Prodigal Son portrays. But right up to and beyond the death of the latter of the two parents of the children to die. In the sorting of that last will and testament, sibling rivalry may again erupt, in an amazingly accurate recapitulation of the entire felt experience of each person, who is channeling his or her immature seven-year-old self. Each of us has a chance to change the story, every day: becoming a new creation as our efforts towards becoming responsible for self in relationship with others leads to more maturity, not only in ourselves, but in the systems we are a part of.

insightful distinction betw resp for and resp to

The gospel story begins with people rushing to tell Jesus the latest news of Pilate's atrocities. This time, he has had his soldiers kill Galilean Jews as they were themselves sacrificing animals in the temple in Jerusalem, thereby mixing the blood of the animals with the blood of the people. As Jesus and his group were themselves Galilean Jews on their way to Jerusalem, the story-tellers may themselves have been expressing concern about continuing this trip into danger. Jesus' response is unexpected. Although he does not side with Pilate, neither does he side with his own people. He warns that worse is coming for those who fail to hear his message, a message to turn away from a rebellion against Pilate in particular, and Rome in general. Apparently, he saw the people as a fig tree without fruit, wasting their attention and energy on a foreign enemy rather than on following the true God.

I have a certain sympathy for those who went to Jesus with this story. Surely, they must have thought, this story will get to him. He will see Pilate for who he is, finally joining us in hating him. But Jesus stands firm. From his view, the problem is not Pilate, nor anyone else. Every person is contributing to the problem in humankind's failure to repent of this tendency to treat the outsider with contempt, whether it is Romans and Jews, Catholics and Protestants, Democrats and Republicans, or Alabama and Auburn fans.

To be fair, human beings came upon this problem naturally. Ducks will chase away a stray duck, one who is not a part of their group. Prairie dogs, living together in huge coteries to share sentry duty against birds of prey, live in separate familial tunnels and will defend their own tunnels from anyone outside of the family group. It has been adaptive across many species, from honeybees to primates, to work for the success not of the species as a whole, but for the success of the group one is a part of.

Humans must outgrow this tendency. Humans must find a way to welcome one another, including an outsider: to respect the dignity of everyone, all the time. Not only does Jesus say this, but Jesus also accomplishes it, in his last days in Jerusalem itself. He manages to relate to Pilate with respect both for Pilate and his own self-dignity, in a situation where the stakes could be no higher.

Remaining calm when one is threatened – even when one is simply tired! – is difficult. Jesus sets the bar high, challenging us to become more than a reactive species, ready to lash out at, or withdraw from, anyone outside of our own group. Becoming a person who can stay connected with others who differ from oneself, while maintaining one's own self, is not for the faint-of-heart. It does not happen quickly. Fortunately, as Isaiah reminds us, God's thoughts are not our thoughts. Although we humans may be quick to condemn others, it is not so with God, who is with us on the journey to become more than ducks, sharing our ponds with others. 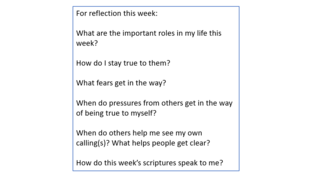 A recent nature film about the Southwest U.S. had a scene involving a snake, a small chipmunk-like animal, and her young, who had fled to the tunnel-nest at the mother's warning sound. The snake had sensed the presence of food and was moving towards the nest; it was up to the mother to protect them. In what seemed an impossible feat, she managed, jumping and cavorting around the snake until the energy to be expended seemed not worth its time, and he left the scene. Similarly in today's story, the chicks head to the mother hen and her protective wings in the presence of danger.

For most species, danger is a part of everyday life. For humans, fear is somehow heightened by knowledge. With Abram, we know that our family is vulnerable. With the psalmist, we are aware that false witnesses may rise up against us. With Paul, we see those whose earthly success abounds, comparing ourselves to them with some alarm. There is much to be anxious about.

Jesus is somewhat matter of fact about the problem. For him, he sees what he has to do. He knows that he is a prophet; he knows what happens to prophets; and he is even clear about where it is going to happen: Jerusalem. He takes a moment to grieve about the city, which he loves, and its inhabitants, who do not have the sense of endangered baby chicks in knowing where to go. But his clarity about himself and his own calling keeps him from worrying about what he is to do, or where he is to go. He knows.

Following the path of being clear about oneself and one's direction in life is a constant challenge. The metaphor of the baby chicks will only take us so far: we cannot spend our lives huddled together against ever-present threats. We can, though, use our families and communities as ways of cooperatively working towards commonly held goals. We can use our families and communities to decrease our sense of aloneness against dangers lurking ahead. And each of us can use those we know best to help us get clear about the path ahead as an individual: how it fits, what it will require, and how one can stay focused on it, despite the risks. Sometimes these are major life decisions. Often they are the day-to-day choices that one must make to lead the life one hopes to lead, and to become the person one can already imagine becoming.

In the midst of life, Lent offers a chance to recollect oneself, identifying and eschewing the many distractions of life. Jesus sets the example, going away alone to consider his baptism, to think about his vocation, to pray, to fast, and ultimately in all of these, to find himself in relationship with a God he calls abba or daddy. The good news here is that Jesus himself got distracted and gives us a guide of what to do about it. First, he didn't get into any sort of back and forth argument within himself. Instead, he finds a principle, in these cases, scripture passages, that have formed him, and rests his case and his choice on them. Second, he does not give up, but continues to pray as the distractions continue.

These distractions are interesting. The first involves the physical. Perhaps many of us can identify here, with appetites that may keep us from deeper living. They may seem to satisfy in the moment, but ultimately lead one away from what one meant to focus on. Jesus is having none of it, pointing out through scripture that life is more than food.

The second temptation involves power. Jesus is distracted by imagining all the ways in which he could become a prestigious leader, with great authority and deference shown, wherever he goes. He declares that none of these things matter to him, and that in the alternative he will spend his life worshipping, honoring, and doing the will of God.

Against all these distractions, Jesus is able to define himself and who he will be. Perhaps distractions should be welcomed as opportunities to consider one's position, to assert oneself and one's own direction. And perhaps in one's prayers, if one stays with them, one can occasionally sense the presence of angels coming to bless the efforts to choose life in all its difficulties and all its fullness.

Reflections are now available in audio!

The questions I pose at the end of each blog post are my way of forming intention in the morning and an examination of my day each evening. I was very much influenced by Dennis Hamm's thinking.